I am what you might call a ‘fan’ of vegan cheeses.

In fact, I might be as much a fan of vegan cheeses as I was a fan of dairy cheeses (oh, so very many years ago…). I recently acquired some Fresh VeganMozz from Miyoko’s Creamery. It’s relatively new to the line of Miyoko’s Creamery cheeses and very much in demand. The first time I tried to buy it, went out of stock faster than I could order it. When I saw it was back, I ordered two packages of it immediately, just to be safe.

After having it both hot on pizza and cold in a caprese salad, I prefer the Fresh VeganMozz hot. It’s still pretty tasty, but I don’t like the texture as much when it’s cold. When it’s melted however, it has a delightfully creamy texture and this rich, slightly salty flavor that you expect from fresh mozzarella. It adds such a smooth, buttery mouthfeel to pizza, it’s hard to believe it’s vegan.

What better to make with a fresh mozzarella-style vegan cheese than Pizza Margherita?

Even though it’s the middle of January, we were able to find some really flavorful campari tomatoes at Costco. Good fresh tomatoes are key to this recipe. If you can find some this time of year, grab them. Grab them and then make this pizza! When we were tasting the recipe, I turned to Tom and said “Holy god this is amazing.” It is literally, the best pizza margherita I can remember eating.

In addition the recipe for the Pizza Margherita I made, I’m going to share with you my tried and true pizza crust recipe. It’s long, but worth it.

I’ve been using this recipe for years. I’ve made it by hand, in a bread machine, and using a stand mixer, it always works, but it works best using a stand mixer. If you’re making this by hand, it will be easiest to incorporate the last of the flour while kneading the dough. Additionally, to get the gluten in this dough developed to “windowpane” stage, it may take 15 to 20 minutes of kneading by hand. 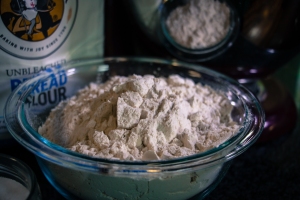 I’ve chosen to do a white pizza version of this classic, using a garlic and oregano infused olive oil in lieu of sauce. Topped with fresh campari tomatoes, creamy Fresh VeganMozz, and a chiffonade of basil after baking, this vegan version of Pizza Margherita is bursting with lush, fresh tomato flavor.

The baking directions are written for a pizza stone (or baking steel). If you do not have a pizza stone, place the unbaked crust on to a pizza pan and bake in the middle of your oven. It may take a bit longer, and the crust won’t be as crispy, but it will still work.

FYI: You’ll have a bit of the garlic oregano olive oil leftover, which is perfect for making a quick vinaigrette to dress a side salad.

For the Garlic Oregano Olive Oil:

For the rest of the pizza: 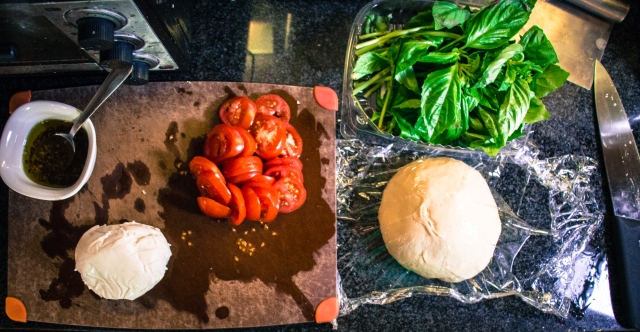 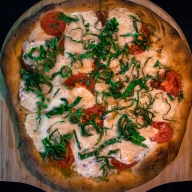 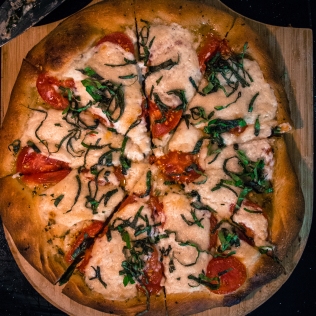 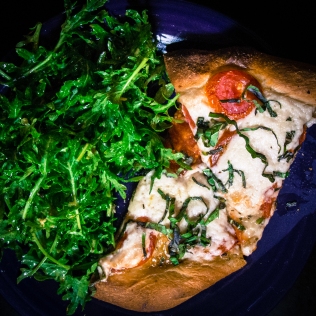 One thought on “Vegan Pizza Margherita”

Minnesota wild rice soup in a unicorn! 🍲🦄
Today I got myself into a full length, back lace corset. I'm not sure I can get myself out. Also I can't sit down. 😳
Oh look, it's the exact amount of #makeup I have to put on so I don't look sick or tired or like I'm trying too hard. Yay.
I cooked a lot today. A lot. ... I did not make the tortillas, though. Soy Curls with mole, red rice, pinto beans.