Citizen Fox, frequent participant in Bay Area Vegan popup events over the last year or so, has recently moved into its own –albeit temporary– brick and mortar location on Mission street at 19th in San Francisco while they renovate their permanent space down the block. The 2293 Mission Street location is an airy, open space with several long, communal tables in the middle of the restaurant and a row of semiprivate snug booths off to one side. Illustrations of animals hang above the private tables and a gorgeous, floor to ceiling mural adorns the wall opposite the booths. The most impressive attribute of the space is the back wall of the bar. Reaching all the way to the rafters, the mirrored, softly lit shelving houses the restaurant’s extensive selection of liqueurs and spirits.

This Sunday was my third brunch at Citizen Fox. As is to be expected for a Sunday in the mission, the eatery was packed with hungry, hungover hipsters and dreary-eyed tech sector trend-watchers eating and drinking Citizen Fox’s plant-based fare… Also a bluegrass band. (I rather enjoyed the bluegrass band. Impressive, as I don’t really like bluegrass.) When I entered, I was shoulder to shoulder with a dozen other folks, wedged into the defacto reception area. Luckily I’d made a reservation for my party, so we weren’t standing in the doorway very long.

Service was understandably slow in the packed restaurant. However, the waitstaff were impeccably friendly and attentive, which more than made up for the speed of service. For the four of us, we ordered a carafe of mimosas (and later a second), smoked potatoes and a large Caesar salad for the table. Two of my dining companions had the Benedict and the other two of us had the “chicken” and waffles. Our moderately lavish (read: lush) brunch for four was around $125 plus tip. (Though, $56 of that was mimosas, so….. Again read: lush) I’m comfortable categorizing it as mid-range.

The mimosas at Citizen Fox are great. Not too sweet, not too fizzy, but light, refreshing and icy cold. A great start to our brunch. One carafe holds around six or seven glasses and costs $28. A good value considering a single glass is otherwise $8. 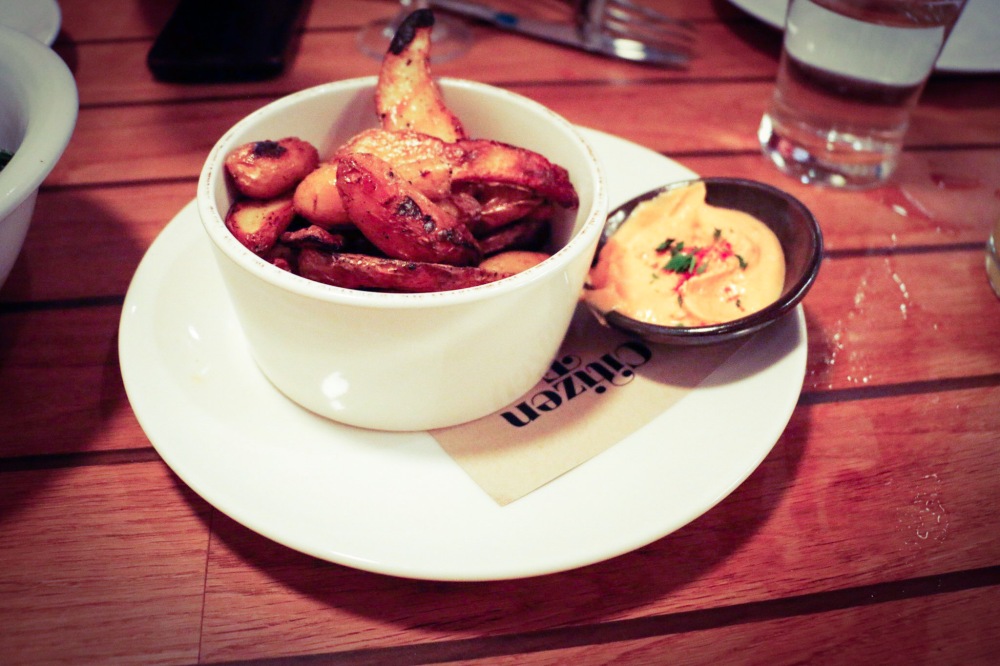 The smoked potatoes are a definite win. Served with a spicy vegan mayo, they are crisp on the outside and creamy inside. They’re not too greasy, either. The smoky paprika flavor plays well with the tangy spicy sauce. Pro tip: even if your entree comes with smoky potatoes, get more, they’re that good. 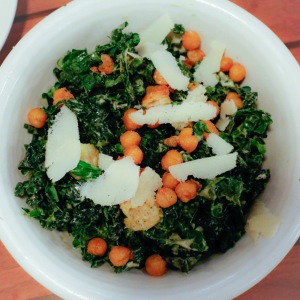 A large Caesar salad would be a meal-size portion for a single diner. However, as a starter, four people sharing the large salad is just about right. I’m a sucker for a good vegan Caesar, and this, my friends, is a GOOD vegan Caesar. The salad has a kale base, and the briney, garlicky Caesar dressing has just the right amount of tang. Crispy fried chickpeas and crunchy sourdough croutons add texture and oh-so-satisfying carbs to this dish. However, the star of this salad is the Parmesan. The shaved pieces of vegan parm atop this salad are so close to the “real” thing in both texture and flavor that I did a bit of a double take. I have no idea where they found this vegan cheese, or what kind it is, but I need to find out. Bottom line: Citizen Fox’s Ceasar salad is amazing, and likely my favorite vegan Caesar salad in San Francisco.

On to our entrees…

This was my partner’s entree, so I only had a bite on this particular day, but I’ve had it before, on my first outing to this restaurant. The Benedict consists of a split English muffin topped with tomatoes, smoky seitan, scrambled tofu, a vegan hollandaise sauce (reminiscent of my hollandaise from Benny and Flo Do Brunch), and the curious addition of tempura fried avocado wedges. This is served alongside a tragically small portion of the smoked potatoes and a side salad of bitter greens and vinegarette dressing. The Benedict itself isn’t bad, but the combination of ingredients sounds better than it actually is. It is, in my partner’s words, “it is exactly what you would expect from a vegan Benedict.” Not bad, but nothing new. Even the tempura avocado, as unique an addition as it is, gets lost within the blanket of hollandaise. I think this dish could be improved with more variation in texture, as well as a larger serving of the (divine) smoked potatoes.

The “Chicken” and Waffle

This is my second time having this dish. The first time I had the Chicken and Waffle, it was spectacular. A fluffy, Belgian waffle with three pieces of fried veggie chicken on top, a big ol’ dollop of vegan butter, and maple syrup. Yum. In general, vegan chicken and waffle is possibly my favorite brunch item. However, Citizen Fox’s version of the dish has changed since the first time I had it. In some ways better, in some ways… Not so much.

Between then and now, the portion of chicken has gotten smaller. Which, I actually don’t think is a bad thing. Previously, the amout of fried chicken served with the waffle was somewhat harrowing. It’s now a more reasonable portion. Also, the last time I had it it was served with watermelon which, aside from not being in season at the time, was a bit too on-the-nose for me. Yesterday’s was served with a delightful bowl of fresh, sweet berries, a huge improvement. The waffle, the big delicious co-star of this plate, was previously a fluffy, golden circle of love. However my waffle on yesterday’s pate wasn’t great… It was hard. My waffle was hard. They bring you a steak knife with this plate, which one assumes is for the fake chicken. Unfortunately I ended up using it to saw my dried out waffle into consumable bites. The syrup and butter helped a bit, but it was still disappointing. I know from experience that getting a vegan waffle crispy and not overcooked is extremely difficult. So I’m hoping that this was a one-time fluke.

I really like Citizen Fox for brunch. The space is beautiful, the atmosphere is exhilarating, the waitstaff is top-notch, and the drinks are fantastic. Even though the menu has some flaws, I am a fan of their food. It’s a great place to bring folks from out of town, non-vegans, too. The place is packed on Sundays, so plan ahead and make a reservation for brunch early.