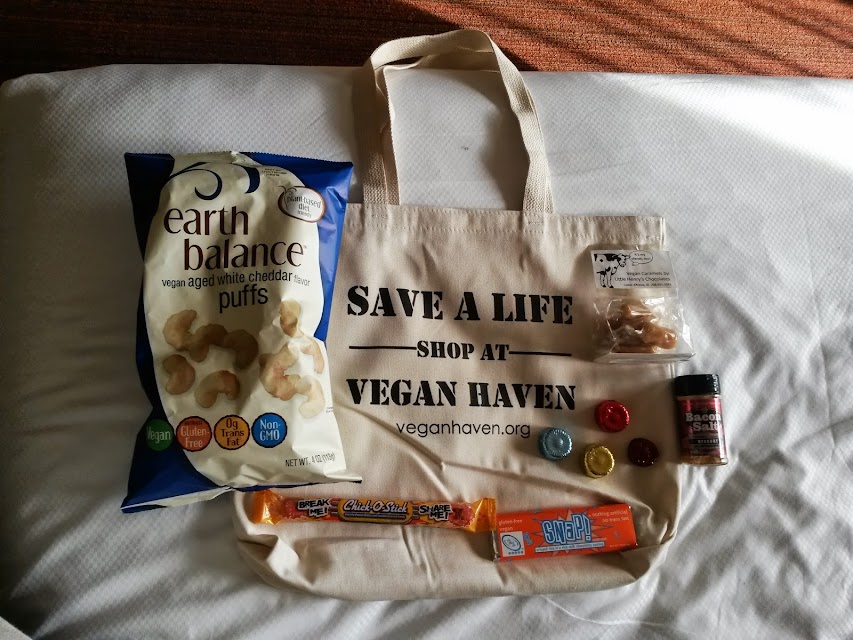 Starting at the top left and going counter clockwise, we have…

(Also known as “Cheezy Poofs” in our house) I’ve had these before. I’ve had a lot of these in my life and they are my favorite vegan snack. The best part is all that cheezy powder that ends up at the bottom of the bag. Nom nom nom…

It’s like the inside of a Butterfinger candy bar plus coconut. Totally delicious. I recommend you try these if you can find them.

Of the Go Max Go line, these are my favorite. I don’t know why the simple combination of crispy rice pieces and rice-milk chocolate is so enticing, but it is. I really feel like I should start buying these by the case because they’ve become so hard to find in San Francisco.

A Caramel Bite (red), a Hazelnut Butter Bite (light blue), a Dark Chocolate caramel bite (maroon), and a Peanut Butter bite (gold). I really like Sjaak’s as a brand. They have a huge variety of different vegan chocolates. Of this group, I’ve only eaten the dark chocolate caramel one and it was fantastic. The slightly bitter chocolate was a really great balance to the soft, sweet caramel inside. Tom ate the Peanut Butter one and the other two are sitting on my desk taunting me as I write this.

I was amazed when I saw this. I mean I knew that this product existed, and that at one point it had been vegan, but I thought they’d changed their recipe. We have a different container of Bacon Salt in our house that clearly states that there are milk products in it. I double checked the label on this one and it is totally milk product-free. I’m confused. BUT, we have some totally vegan bacon salt now. Knowing Tom, it’s definitely going to end up in the Tom Food post tonight.

If you can’t tell, I have a bit of a thing for caramel. Before I went vegan, I always opted for caramel over chocolate. But vegan caramel is hard to find, and I was thrilled to find these. They’re a little sticky, but I find if I keep them in the refrigerator and let them warm up a bit just before I eat them, they’re the perfect texture. They’re made with coconut milk, so they’re super creamy and delicious. I’m a fan.

Last, but not least, I picked up one of their grocery totes made from organic recycled cotton. I bought it as a lasting reminder of my first trip to a vegan store and so I could flag vegan whenever I food shop.

The folks at the shop were really, really nice, too. They were answering another customer’s questions about vegan nutrition and they were knowledgeable and incredibly helpful. Not to mention they were really friendly to us even though we were being totally indecisive about EVERYTHING.

Not only does Vegan Haven have snacks, but they have “real food” and awesome gifts like vegan handbags and wallets. They also sell books on animal rights, vegan cooking, and other topics relevant to veganism.  If you’re in Seattle, I whole-heartedly recommend you check out their shop.