I’m still in Seattle for PAX Prime, so I don’t have a lot of time/energy for a proper post. However! I have been throughly enjoying the vegan cuisine that The Emerald City has to offer. I swear to god I’ve gained 5 pounds since Friday. 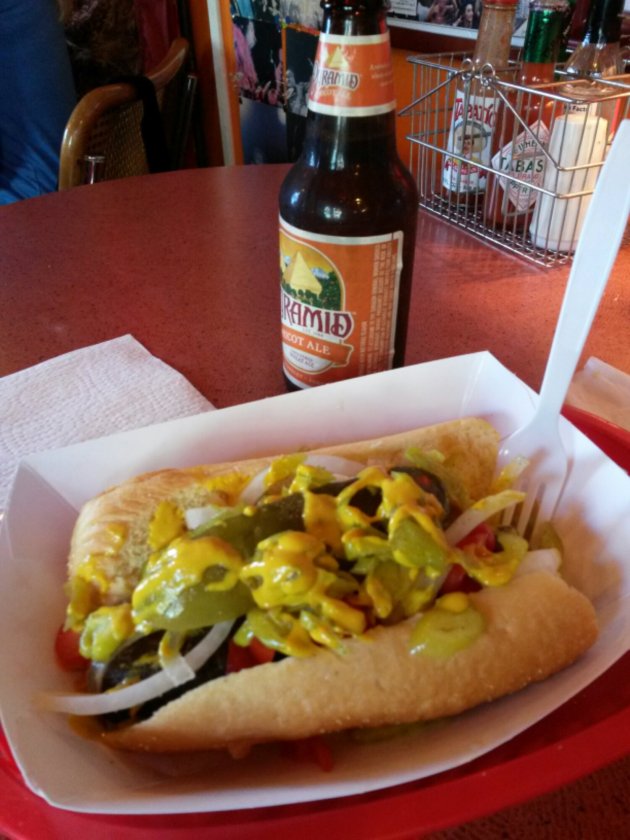 Cyber Dogs, just across the street from the convention center where PAX is held, is an all vegetarian hot dog joint. All their menu items can be made vegan, and the walls are covered in awesome, kischy decor… like old David Bowie album covers and well-appointed mannequin heads.

I had the Chicago dog, a toothsome, well-seasoned vegan link with raw onions, pickled peppers, tomato slices, a whole pickle wedge, celery salt, and mustard served on a hoagie roll. I attempted to take one bite of it and realized I would need a fork to pick up all the morsels that would escape the bun. I lived in Chicago for a couple years, and never managed to have a “real” Chicago style hot dog, so I can’t offer any opinion’s on the Cyber Dogs version’s authenticity. Nonetheless, it was a satisfying convention-goer lunch.

I’ll be back tomorrow with another mobile report on the vegan Seattle food scene. It will most likely be written from the airport. And then on Tuesday, when we’re back in San Francisco, my lovely partner, Tom, and I will be launching a special series for Vegan MoFo! He will be helping out by coming up with recipes featuring his  unique style of cooking. We’re calling it “Tom Food Tuesdays!”

Stay tuned! I have a couple more special MoFo Features in the works and I’ll tell you all about those in the coming days. It’s going to be a great month!