…And now back to our regularly scheduled programming.

If you haven’t figured it out by now, classyvegans, I was in Seattle last weekend. Seattle is a beautiful city where the streets are hilly, the public transportation is clean, and there is a vibrant vegan food scene. One restaurant I visited in Seattle that really stuck out: Wayward Vegan Cafe. I wanted to tell you folks all about it while it’s still fresh in my mind. 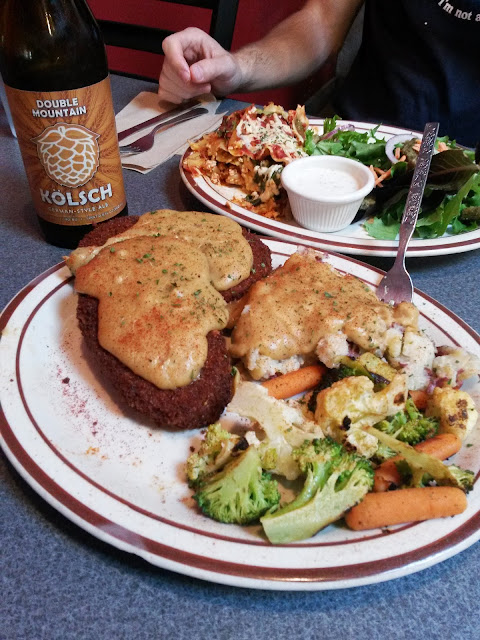 As I mentioned in the post about Vegan Haven, there is a vegan-centric intersection up in the University District that is where Wayward Vegan Cafe is located. Right after we got off the plane and checked into our hotel on Friday, we boarded a bus and made a beeline for this place.

You order at the counter at wayward and sit down with your drinks, your utensils and napkins, and a number. The service is fast and there are some really lovely paintings on the wall. It’s a bit punk rock, a bit DIY, and all kinds of wonderful.

Having not eaten since breakfast, we were attracted to what were surely the most delicious things on the menu. I ordered the Country Fried Steak and Tom had the Lasagna. We also had to have some beer, because… beer.

In the photo there, you see (a big ol’ bottle) of Double Mountain Kölsch. I love a good kölsch. This one is a refreshing, medium bodied beer and not too hoppy even though there’s a picture of a hop on the label. (Which is good, because I hate bitter beers.) It was perfect for that hot summer afternoon. Not pictured is the Porter that Tom had… which I neglected to get a photo of at all and thus can’t remember the name of. Blogging is hard. But it was chocolatey and deep. I’d go with a porter in late fall and winter, not exactly my pick for a summer afternoon. However, it was good beer. Now… on to the food. 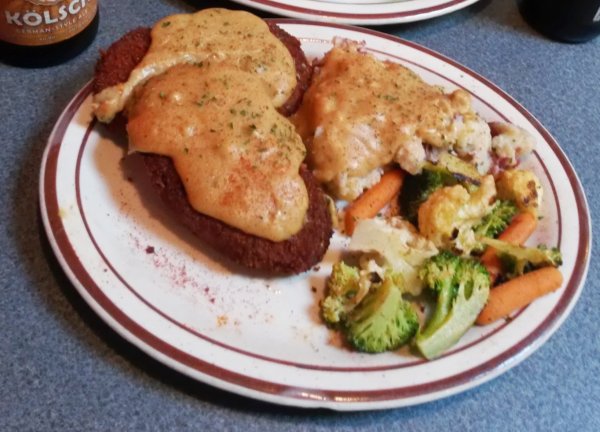 In this slightly out of focus shot we have the Country Fried Steak Dinner… Two BIG cutlets of –what I can only guess– is a seitan based vegan meat that have been breaded and fried, accompanied by garlic-flavored smashed red potatoes, both smothered in “giblet gravy” according to the menu, and a side of grilled vegetables. Let’s talk about the veggies first, because let’s face it, the grilled vegetables are not what you’re here for if you’re eating this dinner. They’re well seasoned, perfectly cooked, not at all greasy, and add a much-needed dose of fiber to this plate.

The steak has a beautiful, crisp coating.  It’s fried a little darker than I would go if I were making it at home, but it works incredibly well here. The breading, even under the gravy, maintains its delicate crispness until the last bite. Like I said, I think the cutlets are seitan based, but I’m not positive. I didn’t recognize what brand it was if they’re using a pre-made product, so it’s possible that Wayward makes their own vegan meat, but again, I have no idea. It’s not so close that it’s scary, which is good, because I hate it when I can’t tell if my fake meat is real or not. The “giblet gravy” does have a definite poultry taste to it. I imagine that there’s plenty of nutritional yeast in it to give it that exact flavor. It’s a creamy, thick sauce that contrasts with the crispy steak breading really, really well.

Now, the potatoes, which you can’t really see because they are smothered in that silky gravy.  I have to tell you, the potatoes made me cry tears of joy when I first tasted them. They have this creamy, buttery texture accented by what I’d guess is roasted garlic. After eating them, thinking about them, and trying to analyze them, I have no idea how they’re made. I’m 800 miles from these heavenly potatoes and I can’t think of a way to replicate them. To me, this is tragic. If I were writing that menu, I would play up those potatoes waaaaay more than they do. They are the star of this plate and my favorite thing I ate at Wayward. 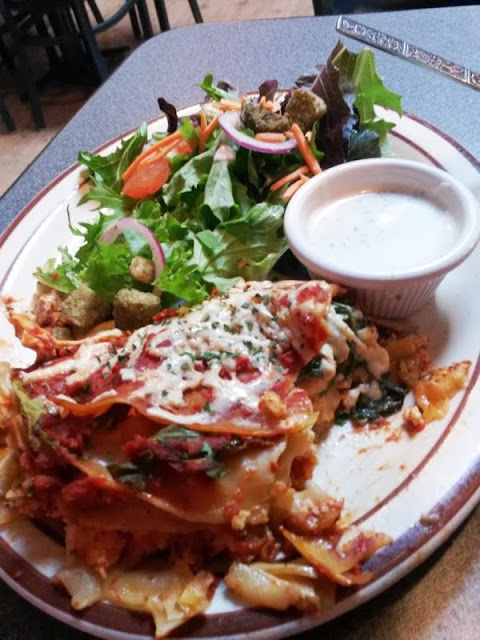 Tom ordered the lasagna on the advice of a friend who said it was the best thing on the menu. Now don’t get me wrong, it’s a fantastic vegan lasagna, but… my dinner was better… anyway… You’ll notice a few bites missing from it in the photo above because we were quite hungry and I had to take Tom’s fork away to get some pictures before he really tucked into that lovely noodle stack.

The lasagna is accompanied by a salad, which is an appropriate side dish here. You’ve got a traditionally heavy pasta dish and lightening up the plate with salad –instead of say, cheezy garlic bread– is a good move, otherwise the meal would get pretty overwhelming pretty fast. The salad is a spring mix lettuce with various chopped/shreded vegetables. Nothing really to write home about, but overall pretty good. What I really like about Wayward is that they offer a vegan ranch dressing that is spot on. If I didn’t know better, I wouldn’t think it was vegan.

When I took a bite of the lasagna, it was like no other vegan lasagna I’d ever had. Instead of relying heavily on a tofu ricotta, they used a really unique combination of ingredients to fill the space between the noodles. Two things I’d never had in vegan lasagna before: Artichoke hearts, and Field Roast Sausage. In combination with the spinach, meaty marinara and creamy garlic sauce, they really make this dish what it is. Somehow, even though it has unorthodox components to it, it tastes like a classic lasagna. If I’d had an Italian grandmother, this tastes like what she would have made for me. I don’t know how, but that’s what it tastes like. In other words: Best. Vegan. Lasagna. Ever.

The potatoes that come with the country fried steak are still better… but I’m a sucker for starches. 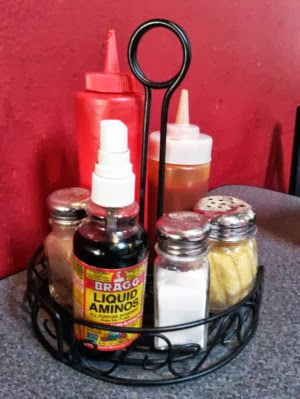 Now these are on every table, and there’s a pretty good assortment there. You’ve got ketchup hot sauce, salt and pepper, and the vegan standards of Bragg’s and a nutritional yeast shaker. I was so excited to see this when I sat down. I was all like “I’m going to put nutritional yeast and braggs all over EVERYTHING!” But the thing is… even though I wanted to, I couldn’t. All the food was so well-seasoned that it didn’t need ANY of this. NOT EVEN NUTRITIONAL YEAST! I know to non-vegans this statement means nothing, but you vegans reading this know exactly what I’m talking about. Almost every food needs more nutritional yeast.

I wanted to mention this because I think that this is a pretty good indicator that the food here is awesome with out augmentation.