I have seen this dish done many times and in many ways.  Over the years, I’ve tried to make many variations of it, trying to perfect my recipe, using everything from a sesame oil based sauce to veggie broth.  And seemingly, I just couldn’t get it right.  The peanut flavor was always overshadowed by the other base that I used, either that or the texture was greasy and slimy and wouldn’t stick to the noodles like I wanted it to.

One drunken night, everything changed.  I found the secret . . . water.  Just water.  No veggie broth, no ridiculous amounts of oil to melt the peanut butter into.  All it took to emulsify the sauce was water.  Of course I didn’t realize what I’d accomplished before I went to bed that night.  In the morning, though, I returned to the kitchen, hungry and hungover and remembered that I had leftover peanut noodles in the fridge.  I tasted them . . . and they were delicious.

My thought is that when you make food while drunk and it’s still delicious the next day, you’re doing something right.

A lot of the quantities in this recipe aren’t exact.  That’s because it’s variable based on personal preference.  I like this sauce really spicy and really soy saucy.  But if you want the peanut flavor to be more pronounced, you wouldn’t put nearly as much tamari and sriracha in as I do.  Also, this recipe is awesome because it’s done in one pot and ready in less than half an hour from start to finish.

Boil water for pasta in a medium to large saucepan.  Add pasta to boiling water and cook according to directions.  1-2 minutes before the pasta is done, add frozen peas to the water and allow them to cook with the pasta.  When pasta is done, drain in a colander and leave the pasta and peas in the colander in the sink while you make the sauce.

Dry out the pan and put it back on the stove over medium heat.  Add oil to the pan, once it is hot, add the crushed garlic.  Saute garlic briefly, about 30 seconds, being careful not to let it burn.  Then add peanut butter to the pan  allow it to melt down into the oil.  Watch the garlic carefully at this point, and if it starts to burn, turn the heat down.  Once peanut butter is mostly melted, add the water and allow the sauce to come to a boil, stirring constantly and somewhat briskly to emulisify the peanut butter and water together. 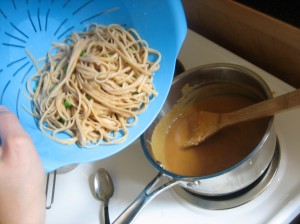 The pasta and peas go right into the sauce.

Add the pasta and peas back to the pan.  Stir it all up and you’re ready to eat!

This is my favorite recipe to make for drunk friends.  It’s easy, doesn’t require much knife work, so it’s pretty safe for drunken cooking, and it tastes soooooo gooooood when you’ve had just a bit too much to drink.  My friend Darren always begs me to make him peanut noodles for him whenever he comes home from the bar two or three sheets to the wind.